Posted on August 4, 2012 by carolkiecker

The flight from Leh to Jammu over the Himalayas was beautiful; I taxied to the Jammu

Train Station and entered another world. There was a crushing sea of humanity on the platform, which signs called the ‘waiting area,’ which reminded me a lot of the Delhi Train Station 20 years ago. There were holy men, porters carrying impossible loads,

families camped out on

the platform—many sleeping, prostitutes parading back and forth, some man selling the Bagavad Gita, and pesky flies by the jillions in the 100 degree heat. Sometimes when I was swatting at a fly on my arm, I realized it was only a rivulet of sweat. I had to wait about three hours for my train to Amritsar. Luckily I found one of very few chairs. A man and a ten-year-old boy brought over a 10-month-old (?) baby with eyes extravagantly outlined with kohl; they handed her/him to me to hold while the man took 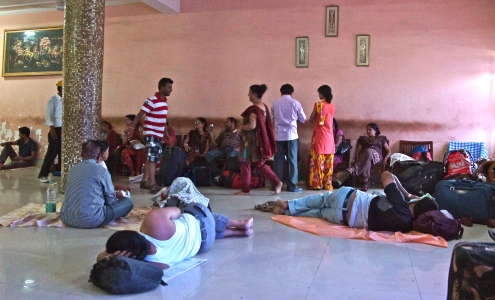 our picture with his cell phone. Eventually a man sitting next to me suggested that I might like to wait in the A/C First Class Waiting Room! I found it, and while it wasn’t air conditioned, it did have some fans and was a lot saner but less interesting.

Eventually I boarded my train, discovering that I was in a compartment with three young men. They were playing cards, a game they called Lakari (a Hindi word pronounced lah kah ree’—rolling the ‘r’ sound), which resembled bridge. They were playing three-handed and had removed all of the diamonds so each hand still had 13 cards. After they finished their game, they invited me to join them, putting the diamonds back 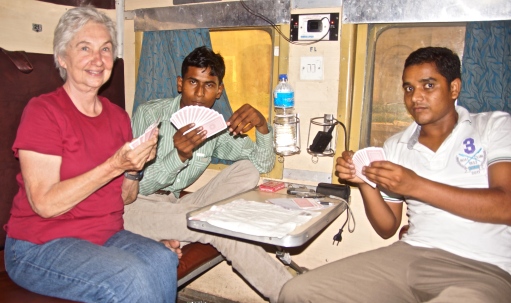 many tricks you think you could take (playing solo, not partners) and the trump (“master card”) stayed the same throughout the whole game, which I think consisted of 11 hands. After about six hands they told me I was in the lead, but they also explained some rules that I wasn’t following, about how you had to play a higher card than the previous player, if you had one. Another thing that was amazingly hard for me was that they played counter-clockwise instead of clockwise, so I played out of turn an awful lot! Funny how deep those brain grooves are! Their English wasn’t so good, so communication was a little difficult about the finer points of the game and the scoring. At one point they interrupted our game long enough to buy a snack of some hot potato dumpling things from a passing vender. These were very good!

At one point when one of the players had bid ‘10’ and had taken a bunch of tricks (but not enough) there was an animated review of the cards played in each trick with ‘madam’ this and ‘madam’ that flying through the rapid Hindi. I don’t know if they had found that I had played wrong, but when I tried to inquire, they waved me off.

They had a different way of shuffling the cards. They held them the long way, pulling them a few at the time until the deck was shuffled. When I shuffled them making two piles and whushing them together, then doubling them back, they thought that was marvelous! Anyway, at the end of the 11 hands, they told me that I had won! It was boodles of fun and made the six-hour train ride fly by.

The Amritsar train station was also bedlam. I got a tuk-tuk to take me to my hotel, the Golden Tower, which is near the famous Golden Temple. What a ride. I think this driver (and the others driving cars, bicycle rickshaws, tuk-tuks, trucks, motor scooters and the pedestrians, for that matter) were the most reckless that I have ever encountered. Plus the tuk-tuk was designed slightly differently so I was sitting up much higher and more precariously. I braced my feet on the back of the driver’s seat, and hung on to my pack with one hand and a strap with the other, for dear life!

My hotel was more ‘middle class’ than I had been in but I found no hot water for my shower the next morning. When I asked about it, the desk clerk told me that since Amritsar typically is at 45 degrees C. (113 F.) there was no need! Actually, I think he had a point, as the cold water was not really cold, either. And I could see as the day wore on, the water got warmer, so I did the sensible thing and showered in the evening! The coolish water felt very good!

If I thought Jammu was ‘Old India,’ Amritsar was more so. The streets were totally chaotic, especially around my hotel,

which I had chosen to be near the famous Golden Temple in Old Town. About 60,000 pilgrims visit the temple each day, which makes a major impact on this city of about a million people. If one had never visited India before and started in Amritsar, I think it would blow you away!

I visited the Temple, which was only a couple of blocks from my hotel. One leaves their shoes and socks at a check stand about a block before you actually enter the complex. There were some mats on the sidewalks, but as I approached the Temple Complex, everything was marble, and in this heat, my poor feet began complaining right away.

The Temple Complex is about a city block in size, I would say, with beautiful white buildings on all sides. It has a marble walkway all around it called the Parkarma, which borders the sacred

pool, called the Amrit Sarovar or Pool of Nectar, which gave the town its name. The Golden Temple is in the middle of the Pool of Nectar with a causeway to it through the 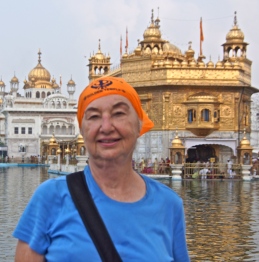 pool. It is said that it is covered with 750 kg of pure gold!

It was mandatory to cover your head—venders were selling little orange headscarves and I bought one for 10 Rupees (20 cents). I hadn’t yet tied it on when a tall Sikh man took it out of my hand and tied it firmly on my head.

Most of the people were making religious observances, touching the doorsteps, kneeling, and praying. There were loudspeakers broadcasting a chant in Gurmukhi from the Sikh holy book.

Most of the complex dates to the 1700s although some has been rebuilt when wars broke out over the centuries. The last altercation was in 1984 when the Indian army stormed the complex where Sikhs were holding out, demanding their own country.

I eventually entered the causeway that leads through the pool to the Golden Temple. Women had a separate line from men. A tall, slender Sikh led the women in song as we 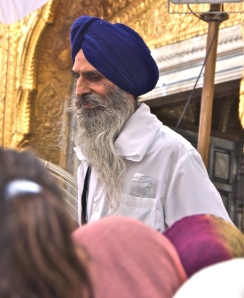 waited in line, creeping ever so slowly toward the temple. They had many overhead electric fans and also volunteers gave out cups of water as the crush was terrible. It took about an hour, but finally I was inside the Temple.

The gold decorations and the marble inlaid with

There was a second floor but my poor feet just couldn’t make it much farther, so I had to forgo seeing that. Getting out was a challenge, too, but eventually I got back to my shoes and back to my hotel. I had entertained the notion of staying within the complex on my last night here in Amritsar, as they have facilities for pilgrims and tourists may stay, too. However, being without my shoes overnight (I guess they would stay where I had checked them, outside of the complex) was too daunting. I’m sure Indians, who are forever going barefoot, would think I am really a wuss about this. And maybe I’m no longer up for staying in a dormitory room with 19 other people, which is what the LP book promised.

The Hindus, not to be outdone, have a Silver Temple in Amritsar. It is called the Sri Durgiana Mandir and has a

similar layout with a big pool surrounded by a walkway, although the whole thing is less impressive than the Golden Temple. A causeway links the Silver Temple to the entrance. The reason they call it the Silver Temple is because it has about eight to ten silver doors. The inside of 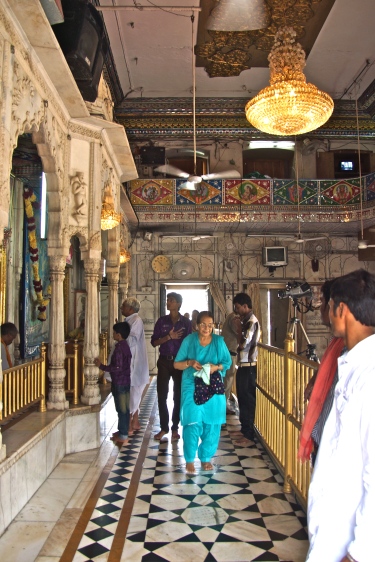 the temple is quite gaudy as Hindu temples often are, but the whole complex was worth seeing.

I had taken a bicycle rickshaw over and back.  It’s amazing how they can manage to steer these cumbersome vehicles in and out of the traffic that is whizzing by. 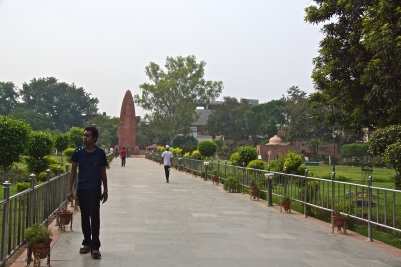 I also visited the Jallianwala Bagh, which is a memorial 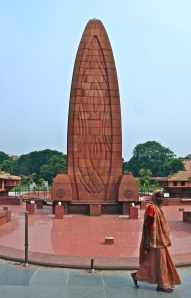 park to the martyrs that were killed by the British in 1919. About 5,000 Indians were holding a peaceful demonstration for independence in a sort of ‘courtyard’ (where the memorial park is now) with only a few small exits. The 190 British troops opened fire without warning and ended up killing 1500 people as they had no escape. This act galvanized Indian nationalism and Gandhi started his peaceful civil disobedience program because of it.

I took a shared taxi to the Pakistan border for the late afternoon border closing, which the LP, while likening it to a Monty Python sketch, seemed to enjoy. Perhaps their writer wasn’t there in the hottest weather. In any case, it was quite a long walk from where the shared taxi dropped us. My taxi charged me 30 R to keep my camera case (not allowed in) in his car. The temperature had to be well over 100 degrees F, and we were seated on concrete egg-frying stands. We sat for about an hour in that hot sun until finally some 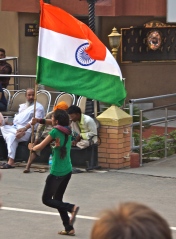 women ran back and forth with Indian flags. Then a self appointed (?) cheerleader brought some of the crowd to a national fervor as they cried, “Hindustan zindabad” (Long Live India). Finally two women soldiers marched smartly to the gate, followed by other Indian male 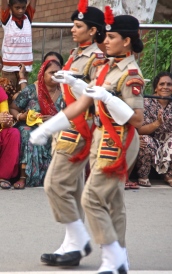 theatrically made exaggerated stomps, kicks and steps, but unfortunately, it wasn’t all that precise, as in precision drilling. The bugler was not 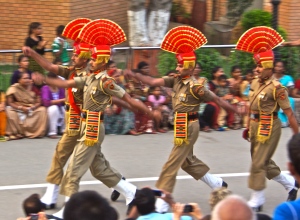 flags, which they did.

India has so many wonderful things to see for tourists, that I can’t think why they would make up this goofy deal. Maybe I was just crabby from the heat, or out of the mood to enjoy a soccer-game-like experience, but I have to say it was one of the few times in India that I wished I were back at the hotel! 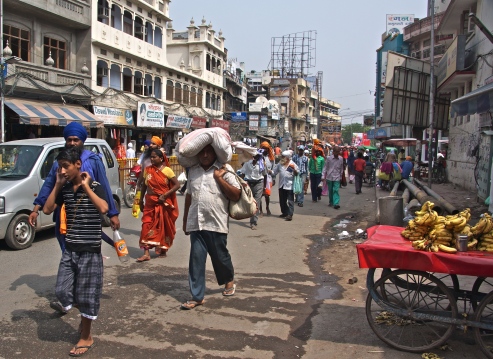 My last day in Amritsar I was thinking to go again to the Golden Temple but my feet complained, so instead, after breakfast I watched the many pilgrims that were headed there, and then followed the garbage truck to the internet. 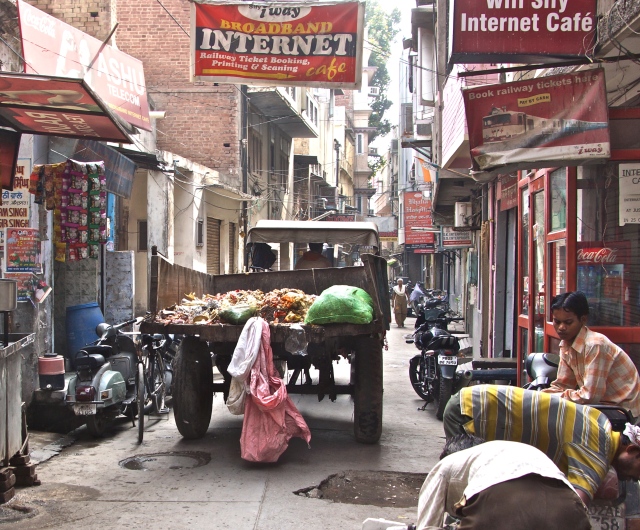 A tuk-tuk, a train, a taxi and three airplanes got me home, where my son-in-law picked me up at the airport. It was a really good trip, but I think it was one of the more challenging that I’ve done, both mentally, physically and temperature-wise. Until next time—- Carol

This entry was posted in 2012, India. Bookmark the permalink.